There are situations where the information posted on the server's hard drive should preferably be stored in encrypted form. For example, you are setting up a server with important information in any foreign datacenter . There are real cases (author familiar with the case not by hearsay ) when disgruntled employees datacenter can take a few minutes to turn off your server , under any pretext ( breaks technical work — not uncommon) , make an image of the hard drive and turn back , that you will look like rebooting the server , while all the information is from third parties became individuals. Either you rent VDS / VPS, where a stranger to you, not only the data center , but also the server and media.

In such cases, resort to encrypt that data leakage which is undesirable. Currently, CBSD has a script wrapper geli для работы с working with encrypted images through GELI framework. As well as before using cbsd is highly desirable to get acquainted with  original man for  jail, and in this context, it is strongly recommended to read the following information:

For common understanding, we denote the following conventions:

Attention! Removing or defacing this file would make it impossible to connect all remaining crypted images automatically and mount these images will only be possible if you remember what the image which password you assigned to the  cbsd geli mode=init file= stage. In this regard, make regular backups of the file.

To start working with an encrypted partition on the node, you must create MASTER_GELI file and come up with a password for it. Use a strong password, because it gives access to all other keys. To use the command of initialization: cbsd geli mode=initmaster.

Secondary running this command will give the question to enter the password, or the command will work without any output, if the file already initialized and mounted automatically at $dbdir/geli. Successful initialization file contents of the file mounted to the directory $dbdir/geli, let the rest of the scripts access to keys for other images.

By default, the image is created for storage of keys equal to 5Mb with AES-XTS algorithm. This setting is in the file ${workdir}/etc/defaults/geli.conf and can be changed via the corresponding entries in  $workdir/etc/geli.conf

Initialization geli-images for CBSD use

GELI Initialization of image should be before you start it up and mounting the write data. To initialize, use the command:

When you first start geli init file /path/to/file will perform the following steps:

As is the case with initmaster, if you start a second init file — the system without question it presents, if the key already exists.

Schematically, the interaction with CBSD GELI script with the system looks like this: 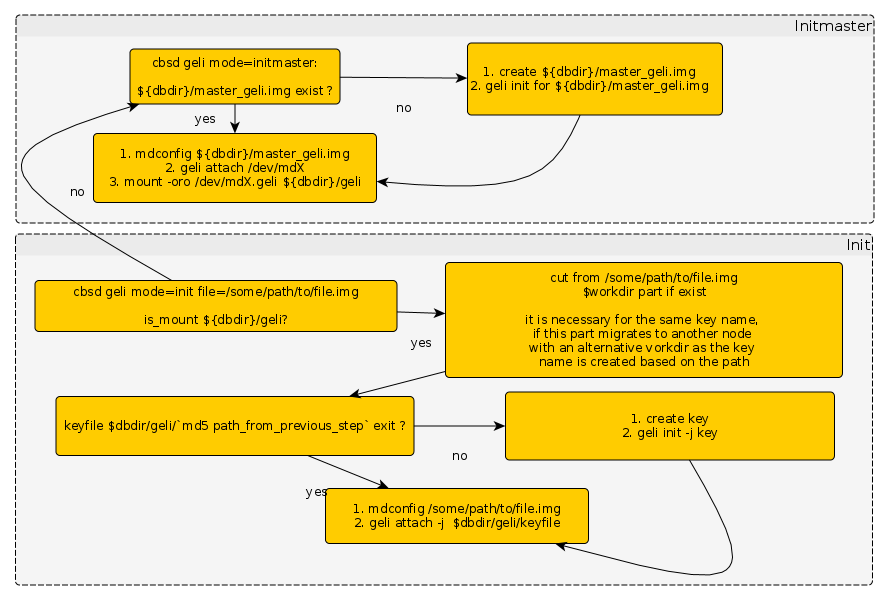 For example, that jail jail1 on startup mount crypted image in directory /usr/home/web inside the environment, on the local fstab file of jails stored the name of the image file and the file system type sets to geli, for example:

In this case, the file webhome.img must me store in the directory /usr/jails/jails-system/jail1/ (when workdir = /usr/jails).

If you store the crypto image is not in /usr/jails/jails-system/$jname/ directory, it is necessary to prescribe the full path starting with /. for example:

However, storage for .img files of jails /usr/jails/jails-system/$jname/ is recommended, because the directory jails-system/$jname participates in the operations of migration, jimport and jexport. Otherwise, you will have to carry their own image file.

Keep in mind, when after booting server you have no init the CBSD geli (cbsd geli mode=initmaster), which after the password has access to the keys to decrypt the images and jails is starting, CBSD can not find a key to decrypt the image and the crypto directory is not be mounted. Therefore, as a rule, crypto jails should have a flag autostart is off(astart=0).

Suppose we have a jail named private1, wherein the base files, configuration, and third party software installed from ports we encrypt is not required, since all this so you can download on the Internet. However, the contents of the user's home directory web mounted in /usr/home/web inside the jail must be encrypted.

Since the server load, we will need to manually enter master password, do yourself sending message to email for those cases where the server can be restarted without our knowledge. For this /etc/crontab drop the line:

, where your_mail@my.domain - is your E-mail.

Perform initialization of master-image CBSD, where will be stored all the keys to the images. You will be prompted to enter the passphrase for decrypting this image again to initialize it immediately. Do not forget it.

Highly desirable to make backups of the file /usr/jails/var/db/master_geli.img, because without it (or with a damaged file) and not remembering personal passwords (step below) to decrypt a particular course, you can not access them.

The same command and the phrase on the next boot the node you activate access to the rest of the keys.

Create an image of sufficient volume, which will be located Encrypting File System. For example, create the image of 10 Gbytes (means that the jails has already been created and jail1 directory /usr/jails/jails-system/private1 exist in filesystem):

Initialize GELI on this file. A phrase that you enter for the decryption will be saved as a file within the encrypted master password image /usr/jails/var/db/master_geli.img, you created above.

The /dev/md1.eli file in output is currently initialized GELI-image, which now need to create a file system.

You can verify that the file corresponds exactly to the image md1 /usr/jails/jails-system/private1/home_web.img, looking at the output of the command:

It now remains to add to fstab of jail inforation about GELI image and mount point. Open or create a file /usr/jails/jails-fstab/fstab.private1.local and add string:

Create empty directory /usr/home/web inside the jails, which will be the mount point:

Additionally, make sure that the private1 jail will not try to run automatically, as in this case, without the primary initialization of CBSD GELI, jail will start with a empty /usr/home/web:

After that run the jail and remains convinced that the directory is mounted:

After each reboot the OS, you need to go on a one-time server and initialize the master-GELI image through command:

Then before the next boot, CBSD be able to use individual keys for decrypt images for starting and stopping the jails themselves.