Example of using CBSD/jail and Consul

In previous article we talked about pre/post/stop/start hooks in CBSD and how thay can help with the integration of CBSD with third-party services. In the DHCPD integration example, we saw how to export and use the internal CBSD variables, to configuring DHCPD on-the-fly so that the service issues virtual addresses to the addresses we provide, which provides control over network settings in virtual environments bhyve(8)

Let's now come up with a solution that demonstrates yet another effective use of hook functionality, but also applicable to containers. One of the frequent tasks of the modern DevOPS engineer's is to divide tasks into separate isolated environments and orchestrate them. At the same time, all operations for delegation, modification and deletion of records should take place preferably automatically, without the participation of an engineer. For these tasks, there is a large number of so-called 'service discovery' application, some kind of directory services that dynamically change/have information about the infrastructure, for example: ZooKeeper, etcd, Consul and many other. In this example, we'll look at integrating with Consul for registering services and query them through HTTP API or DNS. In addition, Consul can act as a distributed store of keys/values, the use of which we will consider in the next article.

We can create virtual environments - by hands, via j/bconstruct-tui and entering initial parameters, or through the cloning of previously configured environments, either using the .jconf script, or using orchestration systems such as Puppet, Ansible, Chef, Saltstack and so on.

We can manage the assignment of fixed addresses, or we can not even think about it and use DHCP. Our main task is to force services to interact with each other and at the same time to refrain from tasks on prescribing and writing out IP addresses of services. On the one hand, this eliminates the interlayer in the form of service discovery and related processes. On the other hand, with this approach, you give up one of the main advantages of using containers - their mobility and portability. containers and virtual environments must do only one thing (and do it well), which results in a very, very large farm that is difficult to manage. In addition, there should always be duplicate containers, and you must mean the worst option with denial of service, when your server can suddenly fail and so the traffic should be distributed to the remaining live nodes.

In order to closely model the production environment consisting of several hosts, we will create two bhyve virtual machines with FreeBSD/CBSD that will run the jail, And we run Consul in the container on our physical server. In my example, all this will happen on one server in Hetzner with one external IP address. For us, this restriction will not play a role, since we will launch the container on a private subnet.

Run cbsd bconstruct-tui and create the first virtual machine with the following characteristics: 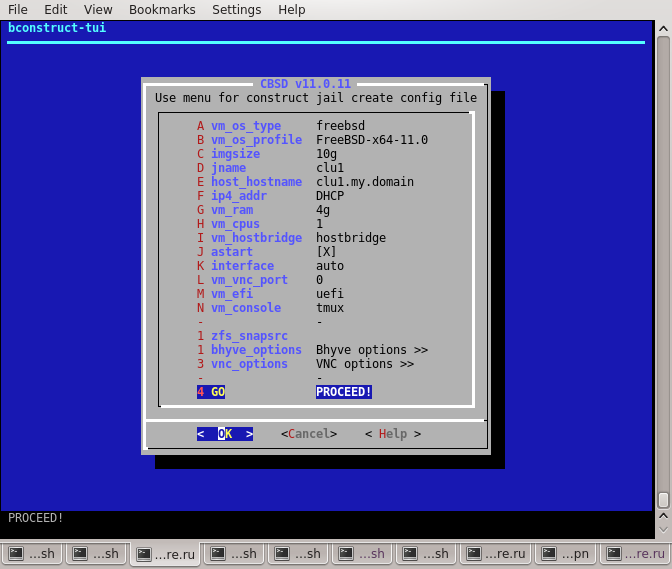 After the regular installation of the OS, we'll go into it, install CBSD and configure it.

We go through the initialization stage of CBSD:

While we are here, we will also get the base files via the command: cbsd repo

Also, we need the curl utility, which we'll use to interact with Consul, so we'll put it:

We'll send the virtual shutdown to reset all parameters with:

Now, in order not to go through the installation procedure twice, we'll clone the virtual machine through cbsd. In this case, if you use CBSD on ZFS, we will benefit from ZFS and copy-on-write, Due to which we get a cloned instance instantly and it does not eat up 6 GB of space Its volume will increase only during the write operation.

Since cloning copies settings including the MAC address, we need to reset it so that CBSD issues any other address.

You can do this through:

Either directly to the database:

Change nodename to clu2.my.domain and change the natip to 192.168.0.6 Then we will send the server to reboot for completeness of verification.

Now it's time for Consul

create a jail on our host through cbsd jconstruct-tui and install consul:

To install the software in the jail creation phase, select the pkglist menu 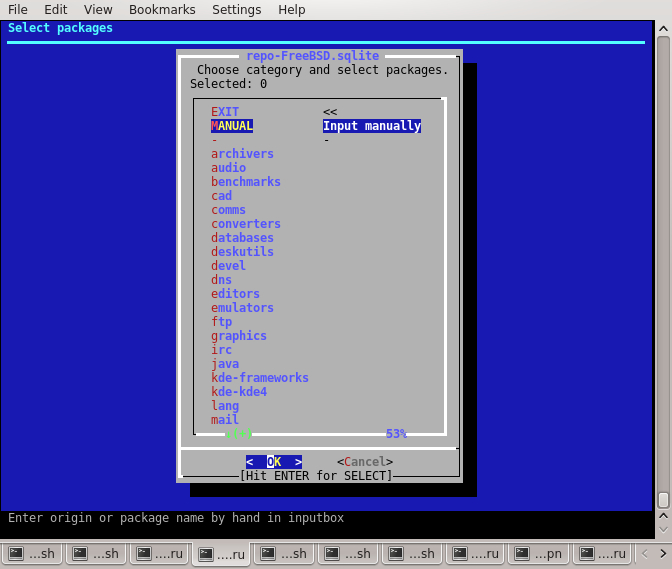 and in MANUAL enter the package name by hands: 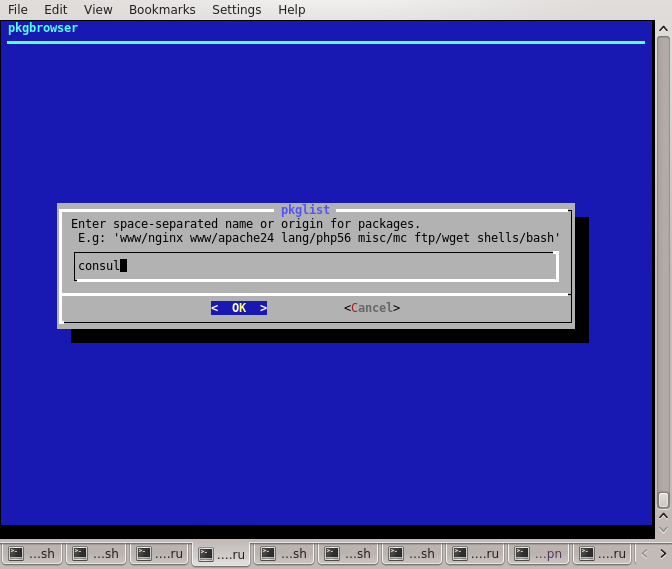 We return to the main menu and select jname. Let the container name is consul:

The rest of the parameters suit us, so choose "create jail" and wait for the end of the initialization

On this, the Consul configuration is almost ready. In a normal installation, the Consul cluster needs to run at least three nodes. A good option is when each hoster also runs the Consul agent on itself, but for this demonstration we confine ourselves to a dangerous installation with one single copy of consul.

We can assign a Consul IP address to the jail from the same subnet as the virtual machines. However, we can forward ports from our only external IP inside the container and work with the Consul via external address, especially since I plan to query him from my home PC via the Internet.

To do this, we will use the port forwarding functionality via cbsd expose, which generates rules for ipfw or pf (depending on which NAT framework you choose) We need to throw several ports of different protocols. We will be configured with default service ports except one - we want to use Consul also as a DNS server. By default, Consul serves DNS requests on the 8600 port, while the standard port is 53. Therefore, by making an expose for all ports, we can only specify the in= port - then out= will be automatically assigned the same value. But when we forward 8600, in= we will have 53, because requests from the Internet to NS servers come to 53 port, and out= respectively, will go to the 8600 port in the Consul jail. By default, expose means working with proto=tcp, so for udp we need to specify the protocol explicitly. So, our commands:

CBSD store the rules and applies them or deletes them when the container is started or stopped. We can verify this - in my case, the framework for NAT is pf, so by running pf we can see:

In the case of ipfw, similar rules would be present in the command line ipfw list Now, we can go to our external IP address on the port :8500 where the standard Consul UI lives and make sure that the service is ready 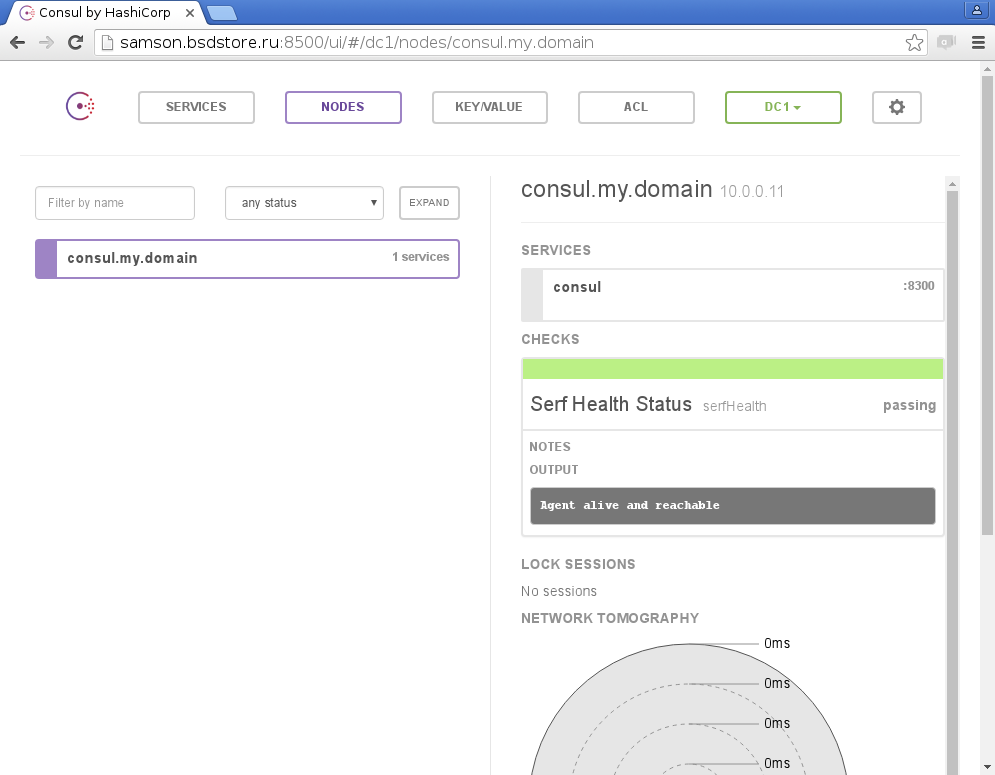 So let's sum up what we did before this stage. We have two different bhyve VMs on which CBSD is installed and ready to create and run the jail. We have a separate Consul container available for interaction over the Internet. Now we come very close to integrating CBSD and Consul.

According to the documentation for https://www.consul.io/docs/agent/http/catalog.html, we can use various Endpoint to work with Consul via HTTP API. Now we are interested in registration and registration of services. In order to limit the visibility of the data in the Consul, we will use the secret token 'secret' given by us during the Consul configuration procedure. To use this, all requests must contain ?&token=secret

From CBSD, it will be useful for us to know the ip4_addr (container address) and container name $jname or $host_name

Now create two test jail, one on the clu1 node with the jail name redis1, the second on clu2 with jname www1:

and write a script for registration and an extract from Consul:

For unregister procedure script the same, only endpoint is different:

The same thing we do on clu2 for the www1 jail and make sure that the behavior is similar: 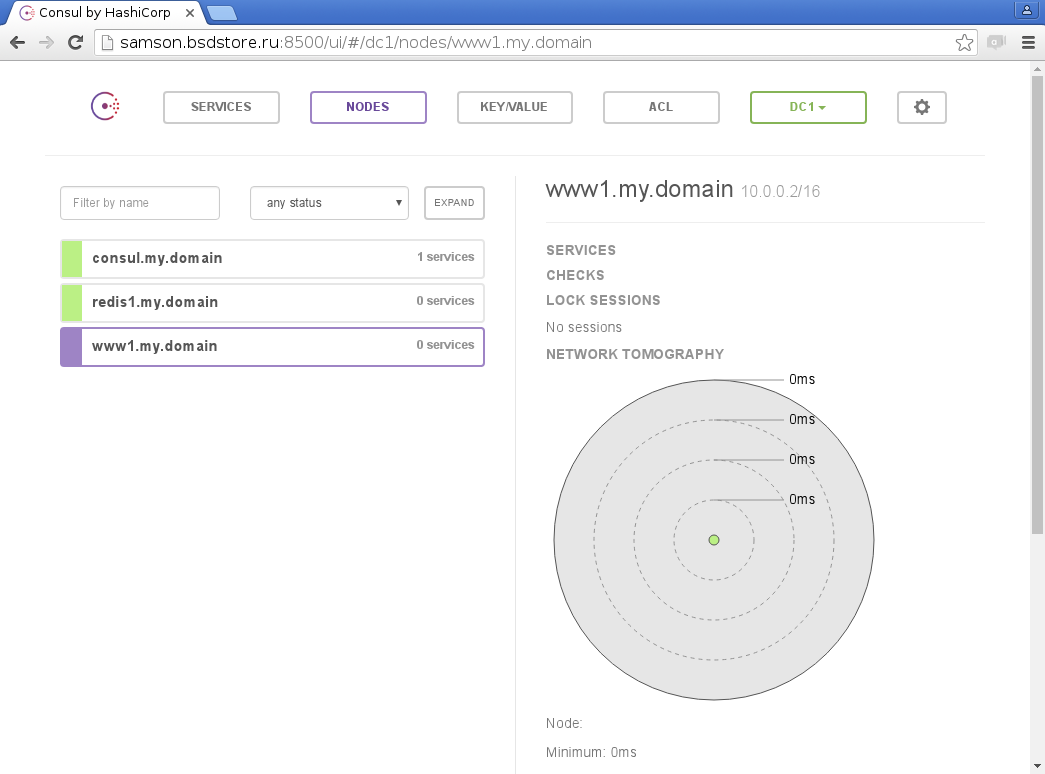 Also, you can query the state through HTTP requests:

Now, try using Consul as DNS and query our services. For convenience, in containers that work with Consul resources, you can add .consul in /etc/resolv.conf:

Thus, you can handle open-records directly:

Also, you can query the service with a division by data centers:

As you can see, the setting is not the most difficult, and the integration possibilities are limited only by your imagination.

In this article, we looked at approach that allows our containers to register in service discovery solution, without the need to manage it by hands for communicate with each other through configuration files. Beyond this review, there are questions of health-check and service discovery of application inside jail.

Since the Infrastucture-as-code approach prevails in the DevOPS environment and the CBSD authors welcome it, an example of service discovery for services-in-jail will be discussed in a separate article about the CBSD and Puppet.

As for health check, at the moment, jail in FreeBSD is not a separated process, which could be monitored by referring to a specific port or daemon. However, each container has an IP, and you can always declare healh-check rule

when the service is registered. Thus, to monitor the operation of the container itself, this may well be enough.

Also, you can run multiple containers of the same service at the same time, while in Consul they will register under the same name, but have an array of IP addresses, which automatically balances the load between them. The availability of quering via DNS allows you to deploy and run really complex configurations in transparent way, without requiring clients to have support with Consul integration.