In view of some of the subtleties with FreeBSD vnet-jail, information about it warranted this separate article. First of all, the VIMAGE functionality requires a customized kernel with

If you get a kernel from the repository through a command cbsd:

then your kernel has support for VIMAGE.

If your kernel does not have the VIMAGE option built in, the parameter vnet in the file ${workdir}/nc.inventory will always be set to 0. If this option is present in the kernel, in the jail creation dialog the parameter will default to vnet.

vnet-featured jail has at its disposal a fully virtualized and isolated network stack, which in turn allows the use of a private jail (albeit virtual) interface, "right" loopback, use within the jail a packet filters (pf, ipfw, pfilter), raise the tunnels and reconfigure the routing table.

When you create a vnet-jails the ip4_addr should indicate 0, which prohibit CBSD set itself an IP address for vnet jail.

Note: The installation of IP addresses in the vnet jail is not implemented yet

Also, if you want to get a jail itself an IP address automatically (via DHCP), you would write a separate section devfs.rules, in which you need to open bpf(4)-device ( unhide bpf*).

For example, append in the file /etc/devfs.rules:

Also, if you completely trust the container and the applications that are running in it (those it's yours), you can use devfs rules in the container settings specify any non-existent rule number, for example '99'. Or, select the profile type 'trusted' when creating the container through cbsd jconstruct-tui. In such cases, inside the container will be all devices devfs

CBSD creates virtual interfaces using a pair of epair(4), but the "other end" virtual cable that connects to the jail, CBSD renamed to eth0 interface.

Note: : Rename this is relevant only for FreeBSD jails. If a jail is run as Linux-based, renaming will not happen.

Renaming to eth0 by the fact that each new epair increments the number of the interface, those of the first vnet-jail in original, interface will be called as epair0a. When you running the fifth of jails, in last jail interface will be called as epair5a. It's not very convenient whith jail migrating (on another server, it may be a different number), and definitely not convenient that every time you have to correct the contents of the rc.conf with the network setup. 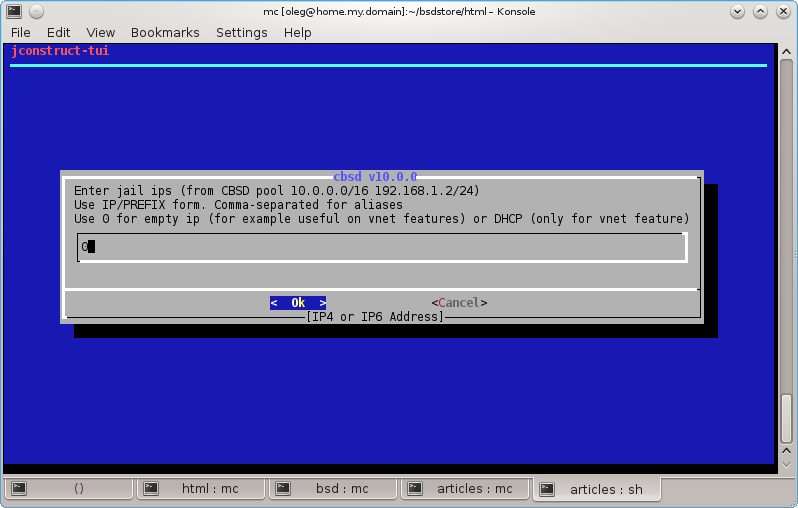 If the kernel has VIMAGE option, it is possible to set the vnet 1 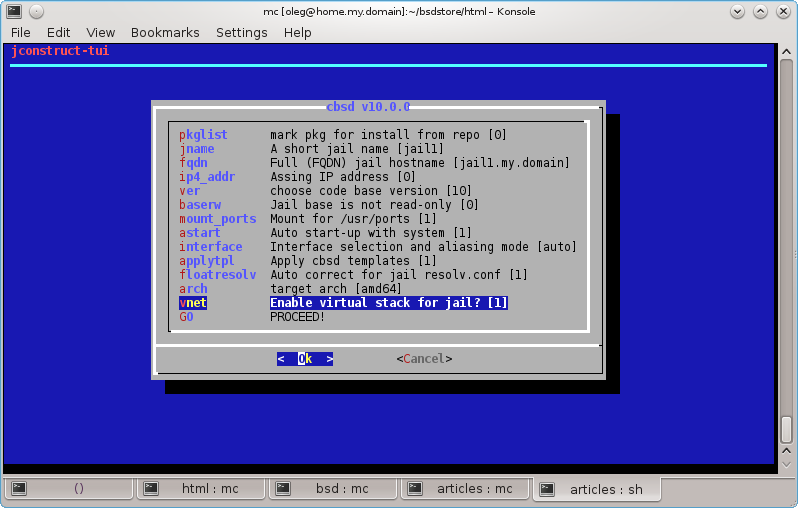 Inside the jail. We do what we want, we get your IP, set up ipfw