CBSD allows the user to create environments at different levels of abstraction by providing a large number of methods for creating environments - CBSDfile, [jb]create commands, which work both in the configuration file and through command line arguments. Finally, you can use interactive dialog menus ([jb]construct-tui). Despite the variety, all of these options require the login to the server each time via SSH to enter the respective commands. The RestAPI service adds another option for managing environments for you, eliminating the need to use ssh, where you interact with the CBSD framework via HTTP / RestAPI requests or through a thin client. Unlike other methods, this level of abstraction solves the following problems:

If you encounter these problems and want to relieve your life - then this is an article for you!

The API service architecture supports working both on a single node (when the API service and the hypervisor are combined), and allows you to use any number of nodes as hypervisors. We'll start by setting up a stand-alone cluster, especially since when switching to a multi-node option, all of these steps are still required.

The service API architecture supports single-site and multi-site coverage, giving you the ability to easily create a private, programmable cloud to run virtualized environments, taking CBSD to a new level of environmental management. In addition to the classic request over HTTP (for example, through the curl utility), the API is supported by a CBSDfile, which in some cases gives a very powerful and more convenient deployment of services in a private cloud. But more on that below.

Let's fix the terminology that will be used in this article.

Let's start by looking at the simplest single-mode installation.

Installing and configuring the CBSD API in standalone mode.

In this example, all operations are performed on one hypervisor, which will act simultaneously as an API and a broker and a CBSD hoster, where working environments will be launched.

Assuming you have a stock vanilla FreeBSD 13.0+ installation.

Since all services are on the same server, we will specify the address 127.0.0.1 for incoming connections and start the service:

First, get hoster FQDN via `hostname` command. Let's say your host has a name: apitest.my.domain

Open ~cbsd/etc/api.conf in any favorite editor and set "server_list=" to server FQDN, e.g:

Here you can check that the API module scripts works:

must return the unique name 'envX'.

Your first standalone private API cluster of VM is ready to serve you!

Let's create a simple minimal payload to create a container, for example, a jail1.json file:

Of course, substituting your public key as pubkey. Let's send it to the endpoint for container creation, where /jail1 at the end means the name of the environment (arbitrary)

In this case, the API will calculate the MD5 hash from your pubkey and the result will automatically become your token, which you can use to control environments and at the same time will be a kind of namespace in the cluster. In it you will see all the resources created with the use of your public key.

Of course, such a mechanism (pubkey-based token) is only suitable for a private cloud. If you plan to raise a service for external users with a similar scheme, use more stringent validation methods to confirm dangerous operations, for example TOTP.

Please note that the first container can be created not quickly if you have not created a container on the host before: the CBSD will download and unpack the base.txz archive for jail base. So make sure the server has an Internet access to receive files from ftp/http.freebsd.org. Either, before the first query, simply 'warm up' system by creating a container via cbsd jcreate/jconstruct-tui.

Now, knowing the token, you can get the status of your container. Among this information will be a line for connecting through SSH to access the container. Get the MD5 sum of your key if you still don't know it ;-)

Use it in request:

So, if you need to destroy the environment, use a GET request for the /destroy endpoint:

Other parameters in payload, which can be useful when creating a container:

Working with virtual machines has a similar interface and endpoint, as in the case of jail, but has a slightly different payload for creating an environment.

And it is created by a similar request as jail:

Other parameters in payload, which can be useful when creating a VM:

Please note that, unlike classic bcreate/bconstruct-tui, the parameters vm_os_type and vm_os_profile here are consolidated to one "img" parameter for even greater simplicity. At the same time, mapping of <img> is set in the file that you have copied earlier, it is ~cbsd/etc/bhyve-api.conf. At the time of writing an article, affordable values as 'img': 'centos7', 'centos8', 'ubuntu', 'debian', 'freebsd_ufs', 'freebsd_zfs', 'openbsd', 'netbsd'.

Please note that the first VM of each image can be created not quickly if you have not created such profile on a host - CBSD will download and unpack the ISO - make sure that the server has an Internet access to receive files. Either, before the first query, simply 'warm up' the system, by creating-run-deleting all OS profiles with which you plan to work through the API.

In some cases curl and RestAPI are much more convenient than ssh + `cbsd bcreate / bconstruct-tui`. If you have to deploy a lot of virtual environments and often, you cannot avoid the need to learn and use some high-level language. The above method CURL and HTTP requests are well suited if you develop a programmable cloud based on CBSD, but it's not very convenient for human. As an intermediate option, we can offer the option of interacting with the API through the CBSDfile.

If you are not familiar with this CBSD feature, be sure to check it out. In order to use the CBSDfile in your private cloud, you just need to add only two parameters to the beginning of the CBSDfile - this is the Endpoint of your API and the key. Having these two options will cause CBSD to switch from a local CBSD installation to the cloud when building. And this can provide a completely new level of capabilities (an example of interaction with a multi-node cluster)!

Parameters such as ssh_wait, jscp and jexec (bscp and bexec for bhyve) should also work, which allows you not only to deploy a virtual environment in the cloud, but also to produce a number of operations in it when creating, an example of such a CBSDfile:

And put in the same directory with the CBSDfile executable 'prepare.sh' file, which will be copied and running in the created environment.

In addition to creating and deleting operations, the commands will work with API-enabled CBSDfile: cbsd login, cbsd status

Finally, there is another option in the form of a thin client called nubectl, which is available for all modern OS. With it, you can create and delete environments, as well as log-in via ssh for unix-like guests, even if you work on Microsoft Windows.

In addition, nubectl supports the description of Infrastructure As a Code via yaml files. Refer to example cloud config. 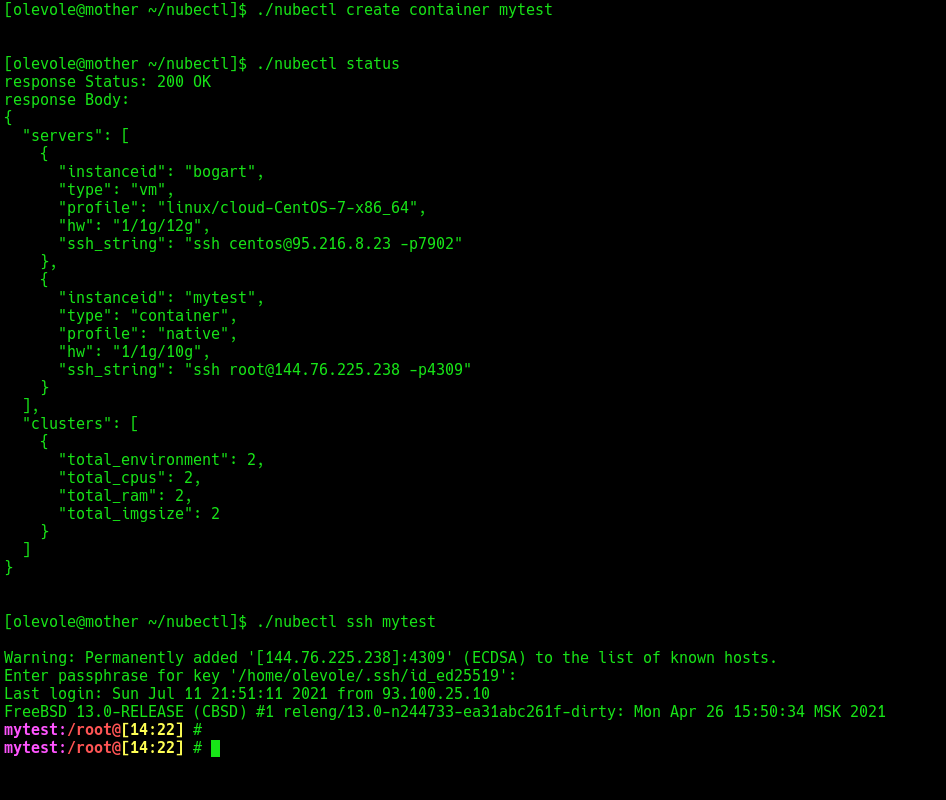 As stated earlier, the current architecture is capable of serving more than one hypervisor. That, with intensive deployment of virtual environments in large numbers, can significantly increase the efficiency and efficiency of your cloud resources.

Our simple API service has the ability to use two external scripts that implement logic for two actions:

> If a virtual machine with a disk capacity> 500GB is requested, select from the list of servers with hdd.

Together with the API module, two sh scripts are supplied, which, as examples, give a unique ID as a virtual machine name and a round-robin server issuing server. That should be enough to start a full-fledged multinode cluster in 10 minutes. Let's do that.

For simplicity and maximum freedom from dependencies, we will not use additional services or databases, we will manage with ordinary files and directory synchronization using the rsync protocol.

Let's start by setting up the service API. In relation to the standalone configuration, in the ~cbsd/etc/api.conf file, we expand the list by the required number of members in the cluster, for example:

You can check that the recommendation script (/usr/local/cbsd/modules/api.d/misc/recomendation.sh) offers hosts in round-robin by default:

For those who do not like to configure the system we have prepared an independent FreeBSD distribution with pre-installed CBSD and API service - you can start working with virtual environments immediately after installing this distribution on bare metal. Please meet: MyBee.

With the configuration file, you can regulate some behaviors, such as working with IP addresses, redirects, IPv6 preferences, etc. By default, CBSD picks IP addresses from your nodeip4pool. The pool is assumed to point to private ( RFC-1918 ) addresses. In order for access to the inside of the environment to be available from the outside, CBSD automatically finds the first free port and creates a port redirect from the external IP address (nodeip4) inside the container. API return SSH connection string as ssh4_string : the external address (nodeip) and the new port.

If you use external addresses as a pool, or you have direct access ( IPSec / VXLAN / other tunnels ) to the host's private network, you can change the behavior by disabling the selection of a dynamic port and turning off redirection altogether. Then, the API will give as ssh[4,6]_string IP:22 of the virtual machine. This is the responsibility of the nodeip_expose=1 parameter in ~cbsd/etc/bhyve-api.conf and ~cbsd/etc/jail-api.conf (for bhyve and jail, respectively).

If you are using a cluster with several servers in different datacenters, which are united into one private network in which the environments are running, you may want to change the source of issuing addresses to an external service, as is done here.

If you want to perform some own custom operations when creating environments - use the ability called 'extras': this is a kind of tags or custom parameters for which you can map any of your operations.

For example, by using:

You can force the API register in the DNS service name: my.domain, which will indicate the created environment. Or you may want to use something like:

which when creating the environment configures VHOST on an external balancer (haproxy/nginx/..), indicating as an upstream for a virtual host IP address of the created environment.

extras can be combined: such as writing the form:

can force the API when creating an environment to register wordpress.my.domain in the DNS, create the LetsEncrypt SSL certificate via certbot, add external IPv6 address as well and create and apply a configuration on a balancer.